Milestones in history from 1990 to today 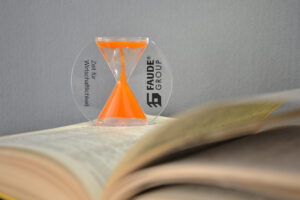 Merger of FAUDE Automatisierungstechnik GmbH with KUKA Deutschland GmbH, dissolution of the location in Ehningen

Move to Gärtringen,
First appearance at a trade fair (Motek)

Relocation of the Faude company
to Ehningen

Relocation to Gäufelden, change of the legal form from GbR to GmbH, change of name to “ FAUDE automation technology GmbH “

In year 1990 the company was founded in the shared apartment of Ute and Dieter Faude. When it was founded, the core competence was in the field of project planning and electrical planning services.

Two years later – a year 1992 the move to the first own business premises in Gäufelden took place. In the same year, the legal form was changed from GbR to GmbH and at the same time the name was changed to FAUDE® Automatisierungstechnik GmbH.
Here, the expansion of our core competence in the area of software development for automation systems took place.

1994 Then, through the expansion and hiring of several employees, the company moved to 71139 Ehningen to a production hall with office space of 200 square meters and another mainstay – switch cabinet construction and installation.

In the years 1994-2001 we worked with success on the continuous development of a well-known customer base.

From 2001 Faude GmbH started researching and developing its own products with the involvement of institutes and universities of applied sciences. In the same year the apprenticeship training started with initially two trainees.

Due to the steady growth of our company, the last move to 71116 Gärtringen into our own company building with 1600sqm took place in 2002. This year Faude was represented for the first time at the Motek trade fair in Sinsheim with an absolute world first, Flexmotion.

Many other trade fairs such as Automatica, Motek and Isgatec followed. More jobs were created every year and trainees were successfully introduced to the world of electronics and software development.

2005 the establishment of a new company “FAUDE Produktionsanlagen GmbH” took place, which implemented the manufacture and sale of complete machines and systems. Here, too, Mr. Dieter Faude was the managing director. In the marketing area, Faude positioned itself larger and the first customer magazine “Faude_inMotion” was introduced. In the same year, the Bosch Rexroth system integrator was named.

since 2010 we are now a sales partner (preferred partner) of the lightweight robot manufacturer Universal Robots from Denmark. Since then, Faude has specialized in the marketing and development of HRC-capable systems for robots from this and other manufacturers.

In December 2014 Due to the high level of commitment, know-how and the success achieved, the merger with KUKA Systems GmbH, which currently holds a majority stake in FAUDE, took place.
Human-robot collaboration, lightweight robots and service robotics are no longer dreams of the future, they are already influencing today’s production and will determine the market in the next few years. KUKA sees the investment in the Württemberg safety specialist as an investment in the future. Working with KUKA enables Faude to efficiently multiply its own ideas and solutions on the market.

Since the beginning 2015 the management level was replaced by a second managing director – Mr. Dipl.-Ing. (FH) Dirk Thamm – reinforced.

2016 FAUDE became a 100% subsidiary of KUKA in Augsburg and, after the departure of the founder Dieter Faude, is managed solely by Mr. Thamm

In September 2019The move took place to Ehningen, where 35 employees are now working on modular and economical solutions for your needs.

The former FAUDE systems are looked after by KUKA Field Service and the experience gained from human-robot collaboration is concentrated and further developed at the KUKA site in Augsburg. end 2020 KUKA integrates the subsidiary.

Two former employees of the company decided in January 2021 based on your experience, to take over the FAUDE brand name and to found a new company with the existing UR accessory products. Since January 2021, UR accessories and programming services have been available from FAuDE Tec GmbH.